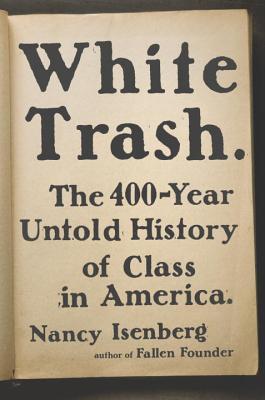 We no more live in a post-class society than we do a post-racial one. Evidenced by recent movements like Occupy Wall Street and #Blacklivesmatter, America is still battling a stratification that makes it very difficult for those at the bottom to claw their way up.

Nancy Isenberg’s White Trash tells a story that those who champion American Exceptionalism don’t like to hear. The myths of our founding fathers and their glorious ideals are pounded into us from grade school on, and the idea that they were just an elite group of educated white men who wrote eloquent treatises on an America that existed only in their minds is difficult to digest. The truths are far more weedy.

For example, Pilgrims. It’s an enduring and seductive myth: America was built by individualists who resented monarchical reign and sought to eke out a living in a new, uncharted country, building their lives and government anew. The truth is that America was a dumping ground for criminals and the poor. As Isenberg puts it: “Embarrassing lower-class populations have always been numerous, and have always been seen on the North American continent as ‘waste people.’”

The idea in shipping all these “waste people” to America was that either the backbreaking labor would inspire them to become more industrious or Natural Selection would have its way. Eugenics proves to be an idea older than Darwin and Galton and the hideous atrocities of the 20th century. Isenberg writes:

“Breeding determined who rose and who fell. The analogy between human and animal stock was ever present. As Jefferson wrote in 1787: ‘The circumstance of superior beauty is thought worthy of attention in our horses, dogs, and other domestic animals. Why not in that of man?’”

Benjamin Franklin analogized humans to ants and pigeons; Jefferson literally compared them to levels of soil. Again and again Isenberg elucidates ugly threads of class superiority in the men we paint as heroes.

The main thrust of Isenberg’s book illuminates the dissonance between our idea of America and reality, how the poor are simultaneously invisible and necessary. From the wilderness of pioneer days to the trailer parks and ghettoes of modern times, the poor are hidden yet without them our most menial jobs would go unfilled. Somebody cleans those toilets. Somebody makes your Big Mac.

Isenberg highlights the way in which we seek to eliminate the appearance of poverty from the American landscape while also reveling in “white trash” entertainment and “slumming.” Think Duck Dynasty, Sarah Palin, and country music.

The trickiest part of writing about “white trash” is that one cannot write about poverty in America without writing about race. Systemic class oppression cannot be disentangled from systemic racial oppression. The focus on poor whites is at times discomfiting, for, as poor as they are, they’re still white. In America, that’s still an inherent privilege. Isenberg goes into some detail about the racial aspects of poverty and the relations of poor whites and poor blacks.

Isenberg’s book comes at a time when class is being brought to the forefront in this year’s presidential race. A rich, white man who appeals to the lowest common denominator, the “white trash” with a racist, misogynist message, and a rich, white lady who panders to corporate interests and represents the reviled “liberal elite.” Even our dark horse candidate, the one who was most willing to confront class disparity was a rich, white man.

He was outvoted. “White Trash” contributes to a conversation that America’s been having, acknowledged or not, since the first colonists, the dregs, the castoffs, the “waste people,” crawled ashore.

One thought on “White Trash by Nancy Isenberg”