One of my favorite reads of 2017 was Grady Hendrix’s Paperbacks from Hell. Hendrix, the author of gimmicky Horrorstor and My Best Friend’s Exorcism, rounds up the best of cheesy, pulp horror from the 70’s and 80’s and presents them in all their insane glory. With a focus on mass-market paperbacks and their gorgeous, gory covers, Hendrix pays tribute to the underrated artists and authors whose work combines to offend, disgust, and delight the reader. 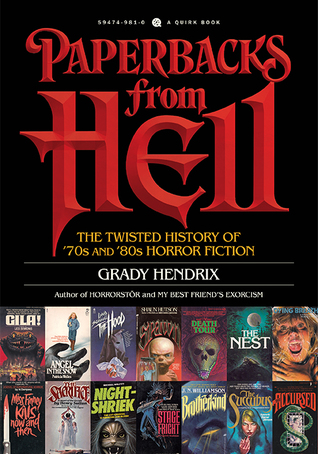 A goodly portion of my reading time this year has been devoted to wallowing in this madness, leading me to find a new favorite author, and, as per usual, Nazis. I traveled over a century in horror this year. How has horror fiction changed?

Published 25 years ahead of Dracula , Carmilla might be the OG of vampires. Just like it’s more famous successor, there’s a dark castle in the middle of nowhere, mysterious deaths, ladies fainting all over the place, and a mysterious, charming woman who sleeps later than a teenager.

The horror literature of this era tended to be melodramatic and vague, professions and exclamations and declarations littered plots, which veered toward the nonsensical when summed up cliff-notes style. Gore was limited to “Yeah, we cut off her head” without going into visceral descriptions.

Looking at the billions of iterations of vampires that followed, the vampire as a solitary, blood-stealing creature with a few simple rules about sunlight and wooden stakes is refreshing. The title character, Carmilla, just wants to live for eternity and drink some blood? Can’t we leave her be?

1959-62: The Haunting of Hill House/The Sundial by Shirley Jackson, Something Wicked This Way Comes by Ray Bradbury

I read Shirley Jackson’s The Haunting of Hill House every year because it’s my absolute favorite novel, and if you don’t think it’s the greatest, you’re obviously illiterate.

Published in 1959, the novel inspired authors from Richard Matheson to Sarah Langan to Stephen King. In addition to re-reading Haunting, I read Jackson’s earlier, apocalyptic novel The Sundial, a less polished story about a group of characters huddling together in an isolated mansion, slowly driving each other mad as they await a prophesied apocalypse.

In Paperbacks from Hell, Hendrix describes this particular period as lagging behind the times. “Horror seemed to have no future,” he writes, “because it was trapped in the past.” Classics like those above would not be labeled “horror,” but ostensibly the more reader-friendly “thriller.”

A novel about two boys who encounter a haunted carnival with a time machine carousel, a witch in a hot air balloon, disfigured victims disguised as circus acts, and a demonic ringmaster with living tattoos certainly sounds like a horror novel though. Ray Bradbury’s Something Wicked This Way Comes is plotted like horror but reads like a stream of consciousness, coming-of-age tale. It’s almost sweet, in a grotesque, demented way.

The horror novels of this era could be viewed either of two ways. One: they’re musty relics tied to the gothic moorings of Bronte, Du Maurier, Shelley, and Stoker, trapped in polite conventions where the darkest of acts are implied. Or they’re the last vestige of honorable horror before the flood of depraved and disgusting tripe that flooded the market in the 70’s and 80’s and of course perverted our children’s minds.

It’s really kind of both. Horror finally caught up to the culture at a time when cinema was going for broke with brutal films like Last House on the Left, Straw Dogs, and Cannibal Holocaust. It became less about ghost rapping under tables and more about maniacs playing jump rope with intestines. Clive Barker’s Books of Blood could certainly complete with the nastier of movies that seared our brains and haunted our dreams.

My very first audiobook this year was a little gem called The Elementals. I bought it because it was super cheap and actually looked pretty good. It was great. Who knew the writer for Beetlejuice and The Nightmare Before Christmas could churn out cheesy horror pulps full of memorable characters and atmospheric chills?

I’ve already written at length about The Elementals, Katie, and The Amulet. I just wanted to give another shout-out to my new favorite horror author. Sadly, he died in 1999 at the age of 49 and the world is a lesser place because of that.

As I was adding up the fiction and non-fiction I read this year, I paused as I tried to categorize Jay Anson’s The Amityville Horror. Is it fiction? Is it non-fiction? Will we ever know for sure?

Just kidding. That shit is made up.

I just started listening to an entertaining podcast called My Favorite Murder, on which the hosts relate their favorite murders each episode. There’s something like a hundred episodes now, so that’s a lot of murder. They commented on how there seemed to be an explosion of crazy murders happening in the 70’s, and one of those crazy murders was committed by Ronald DeFeo, who shot his entire family while they slept, then went to the bar.

Even crazier is the curious immortality of The Amityville Horror. Posited as a true story, it tell the story of the Lutz family, those unfortunate souls who moved into the house where the murders were committed. They only stayed 28 days, claiming all sorts of paranormal nonsense. Approximately eight million movies have been made, as recent as this year.

I was surprised by how readable Amityville turned out to be; the writing is solidly mediocre, and I can only assume the author was paid extra for exclamation marks. But the story is pretty good. Truthful? Believable? Not so much.

The Wolf’s Hour is by the same author who brought you the apocalyptic epic, Swan Song. It may be the only decent werewolf novel in existence. My review of it is here. Suffice it to say one of the classic, if not so pulpy, 80’s authors.

Incarnate is by another master of horror, Ramsey Campbell. It’s a slow burn, and for much of the novel, it seems like nothing is happening at all, or that it’s fitting together in any coherent manner. But wait until the end. A group of people participate in a study about prophetic dreaming, and eleven years later, the echoes of that mutually shared dream finally bear down.

I have to thank Paperbacks from Hell and Michael McDowell for igniting a love for schlocky horror. I’ve always been a big B movie fan; one of my favorite films is the bloodiest movie ever made, Peter Jackson’s Dead Alive (or Braindead.) The nerd in me delights at the intersection of cheese and gore where the 80’s collided to produce some of the most ridiculous and amazing horror films/books of all time.